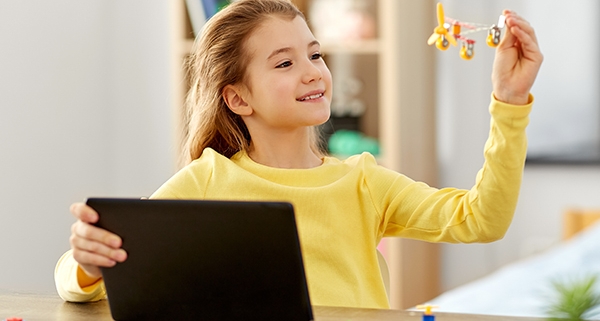 There are two types of parents in this world.

If you fall within the first category, awesome! Today’s blog is definitely for you.

And if you fall within the second category, that’s great! Today’s blog is definitely for you too.

Did you know that all children are predominantly left or right brained?

So if you’ve been wondering which one of the two your child is, you’re in the right place.

And if you were just on the hunt for an interesting new read, you’re still in the right place.

These children work effectively with a step-by-step sequential approach, like to work independently, have a strong sense of time, and are objective. Writing and spelling generally comes easily to these learners, and they tend to learn well from instruction. Arithmetic, with its logical, sequential steps, is also a subject in which left-brained children often excel, although conceptual mathematical subjects such as geometry may be challenging. Left-brained children tend to benefit from an auditory teaching style, and often demonstrate academic aptitude early on.

Right-brain oriented learners, on the other hand, are visual. They focus on holistic concepts rather than details. They tend to be unstructured and impulsive, and are usually very creative, often demonstrating proficiency in art or music. These children do not enjoy working independently; they learn best from discussion, interaction, cooperation, and involvement with whatever they are learning. Right-brained children think in pictures rather than words. They generally have a good sense of spatial orientation (but not a good sense of time) and are attuned to emotions. These children prefer the main idea to the details, and often learn in spurts rather than in a steady sequence. Right-brain oriented learners often come to conclusions intuitively, without knowing the steps by which they got to the answer, and often prefer a visual and/or kinesthetic teaching style. It is not uncommon for right-brain oriented children to be “late bloomers” academically.

If you’re mostly analytical and methodical in your thinking, you’re said to be left-brained. If you tend to be more creative or artistic, you’re thought to be right-brained. This theory is based on the fact that the brain’s two hemispheres function differently.

What is the difference between the two?

Our brains consist of two sides or hemispheres. Children with behavioural, academic, social, or other challenges often have an imbalance in hemispheric brain communication – this is referred to as “functional disconnection syndrome”, or where one hemisphere is processing information too slowly. This causes one side of the brain to be stronger, while the other side develops more slowly and is weaker.

The right hemisphere of the brain controls sensory processing and expression. Children who are weaker left-brainers are often very visual, spontaneous, emotional, and intuitive but may struggle academically with memorising facts and paying attention to details.

Because these children can often find it difficult to memorise facts with auditory cues such as repetition or rhymes, a good idea is to provide visual cues like picture stories which appeal to the emotions or concrete objects like blocks or coloured counters. For example, when teaching letters of the alphabet or vocabulary, integrate the letter or word into a small cartoon so that your child remembers the whole picture. Use a similar strategy for numbers, bringing colours and images into play.

Working in groups is an ideal situation for weaker left-brain children as they like to tackle art projects and often come up with stimulating and original ideas. They respond well to visual demonstrations on PowerPoint and enjoy music, videos, and dance as methods of learning. Role playing is enjoyed by right-brainers, as they prefer to be in the middle of the action rather than listening to a lesson.

If your child’s left hemisphere controls are in charge, you will notice him or her displaying certain traits at home. For example, he or she may like to keep the same routine, such as eating the same foods for breakfast, lunch, and dinner. Left-brained children also appreciate directions and tend to follow directions well.

One of the most noticeable left-brain characteristics is a tidy room. If you rarely tell your child to clean, he or she may have dominant left hemisphere controls. As helpful as this can be at home, you might notice that many left-brained children are not very emotional or very affectionate. They are inclined towards logical thinking instead and, they may often like to spend time alone.

Right or left? Why the side of a brain makes a difference

Many children (and adults) exhibit a mixture of qualities from both brain areas. However, knowing which side is predominant in your child can make all the difference when they are learning, as well as help you identify the learning style that should be employed while learning with them.

One of the most well-known right-brained people to ever live was the genius, Albert Einstein. He was a difficult child, because people thought he had learning disabilities as he could not write down simple steps when doing mathematical equations. However, he always got the right result! The problem he had, and that most right-brained children have, is that they tend to work in wholes instead of in parts.

Other qualities right-brained children may have include:

This is why right-brained thinkers tend to choose future careers that are more intuitive and require less organisation and structure. They often go into fields like acting, sports, politics, crafts, or any occupation that involves interaction (with people or animals).

Left-brained thinkers are more common and thus, most education systems are geared towards learning and text that is more favourable to them. Left-brained children are more likely to score well in their exams.

These left-brained thinkers tend to choose careers that are highly structured and organised such as banking, law, mathematics and science.

Here are some techniques that you can use to help your child if they are highly right-brained in their thinking.

Getting to know our accredited online GED curriculum
Scroll to top