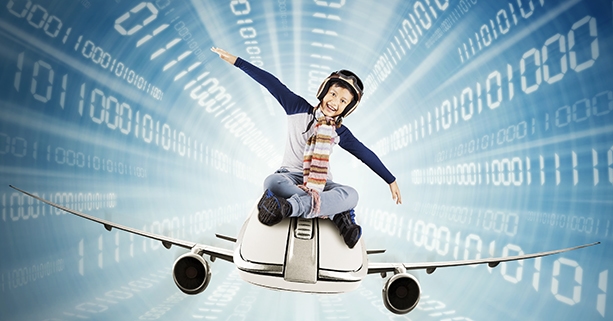 Welcome to the future

If it sounds like we’re excited, it’s because we are. And you should be too.

Why you might ask? We’re about to spill the beans.

It’s just one of those facts of life.

Some jobs really are better suited for robots.

Jobs like telling traffic when to stop and when to go, keeping a schedule for load shedding, deciding what nutritious meal to cook for dinner, sitting in traffic –

And cleaning the floor.

The good news is that these things are bound to get better with time, and your child could play an instrumental role in changing things for the better.

Understanding computers and learning the basics of programming helps children to develop an appreciation of how things work. It also teaches them how software engineers use mathematics in order to solve problems in a logical and creative way.

The most important trend in programming for the next decade will be using artificial intelligence (AI) to automate much of computer programming. AI and machine-based learning can automate coding and help programmers write faster and better code.

Coding develops logical and problem-solving skills in students as well as encourages creative thinking. The world must prepare for the Fourth Industrial Revolution, and students should therefore equip themselves with the necessary skills of the future.

Through language, children learn how to communicate. Coding is another type of language which is used in technology to communicate. Language also strengthens both verbal and written skills, which is why it is important that children are exposed to different languages at an early age. This further helps them to make sense of the world around them. Every letter in the coding alphabet has a special formula of 0’s and 1’s which give the technology around us directions on how to perform.  What better way for our children to understand why and how the technology around them operates, than by learning to code themselves.

Why should coding be taught at schools?

Through learning the basic literacy of the digital age, children are able to understand how the technology around them works.

Today’s economy is in urgent need of people with programming skills to meet the demands of the burgeoning tech industry. That’s why introducing your child to coding is a crucial investment in their future, a 21st century skill that’s quickly becoming necessary for a wide range of professions.

It’s incredibly important for children to learn computational thinking at a young age so they can learn to take a problem, understand it and develop solutions for both humans and computers to solve. One of the benefits of learning computational thinking, the core concepts behind developing code and algorithms, is that it gives students both the tools and the idea that there are many ways to solve a problem, whilst at the same time encouraging curiosity, collaboration and communication.

Not only will learning to code mean solving problems using maths, but it also requires children to think outside the box using those creative skills. Trying to solve difficult problems requires creative solutions, a highly sought-after skill which is often difficult to teach in more traditional classroom subjects.

Coding skills are in high demand

The tech industry is in constant need of new workers, and it’s not just coders or computer science majors — they need graphic designers, software developers, computer engineers, linguists, mathematicians, and more. Tech jobs are not only plentiful, but they’re also lucrative.

Coding helps children to be able to visualise abstract concepts, lets them apply maths to real-world situations and turns it into a fun and creative process.

Children who learn to code are able to better understand, plan and organise their thoughts.

This in turn, helps them to become confident problem solvers.

As they learn to code and give their projects direction, they also learn that there is no one way to do something, and that should their first way be unsuccessful, they are able to write a new plan, a new code, and try again.

How does coding prepare children for high school and beyond?

Like a foreign language, coding skills are best learned early. Once children are fluent in the type of thinking required to break down and solve computer programming problems, the transition to other more advanced coding languages is relatively straightforward.

One of the biggest obstacles to succeeding in university-level computer science classes is a lack of confidence in tackling difficult, unfamiliar material. Early exposure is the best solution – being introduced to coding and any kind of software development at an early age makes it easier to learn the more technical aspects of computer science in high school and varsity.  In fact, a study by Google and Gallup shows that early exposure is one of the most important ways we can shrink the gender gap in STEM, as it boosts confidence in children, especially young girls, while they’re still interested in technology.

Coding is a lifelong skill

Even if your child wants to do something outside of computer science when they grow up, their coding skills will prove useful across many different fields. Coding teaches problem solving, organisation, maths, storytelling, designing and a whole lot more.

The ability to code transforms children from passive consumers into innovators, with eyes that see every piece of the technology puzzle, not just as a toy but as a way to problem solve and an opportunity to create.

Coding and software development can be challenging at times especially when faced with a complex problem. By grasping and understanding the problem using computational thinking, children will learn to come up with creative ways around it if at first they don’t succeed. This is key to teaching children to develop resilience when faced with a challenge and a level of perseverance that will also keep them focused and engaged.

Why is coding vital for our future?

The future generation will hold jobs we can’t even dream up yet – How will those jobs come about? Who will create them? What will happen to the old jobs? Where will those jobs be? Not to worry, these “new” jobs are just an evolution of the way we work and the things we do now.

Learning “how to code” is the buzz phrase we might say for computational thinking.  We are not trying to create a new generation of 100 percent computer programmers but understanding the basics of computer programming, computational thinking and general tech literacy is essential to becoming an active part of our communities and the future workforce.

If we still haven’t managed to convinced you that Coding and Robotics should without a doubt, be one of your child’s subjects, perhaps knowing that your child could be the next Elon Musk for only $45 may do the trick.

Teach your kids resilience with our Mind Power for Kids course